Toshiba’s new 2013 line-up of LED TVs consists of the L2300 series, which targets mainstream buyers and includes a 32-inch LED TV that Toshiba says is an ‘affordable yet stylish’ LED TV solution. Like the company’s high-end TV line, the L2300 series has also succeeded in getting a benchmark color scheme for its 2013 edition that Toshiba calls ‘Gun Metallic Satin Deco.’ The TV has been made increasingly attractive with its clear finish and sophisticated look, featuring a unique gray strip on the front-bottom of the panel and an elegant base making it easier to place anywhere. 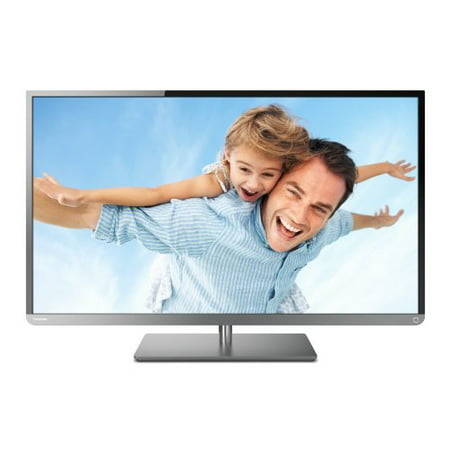 The TV has Audyssey audio with Audyssey EQ and Audyssey ABX for crystal clear and optimized sound output. With HDMI inputs, user can upscale their multimedia experience on a home theatre with full HD 1080p video and HD audio. It has a USB media input to directly play music and video from USB devices and includes 3 HDMI inputs, a composite input and a USB 2.0 port. It is easily wall mountable and complies with energy star regulations.

This TV is an ideal choice for mainstream buyers and budget conscious individuals who do not want to spend too much yet need a quality solution for their HDTV viewing needs. It offers all of the vital functionality of most modern LED TVs.

This TV has an elegant design and offers 720p resolution with a 120Hz refresh rate and incorporates some high-end features such as Dynamic mode, Gaming mode, DynaLight, HD audio, USB and HDMI ports for an extended multimedia experience.

This LED TV comes with a one year official manufacturer warranty from Toshiba.

The official price set by company is higher as compared to other 32-inch models available on the market, however it does possess many more advanced features making it still worth its slightly higher price tag.

This 32-inch LED is available at the major retailers such as Walmart and Best Buy, as well as online retailers like Amazon and NewEgg.

The L2300 series is a mainstream product from Toshiba and so far has received great feedback from consumers, as many of them are planning to purchase one of L2300 models as their next LED TV.